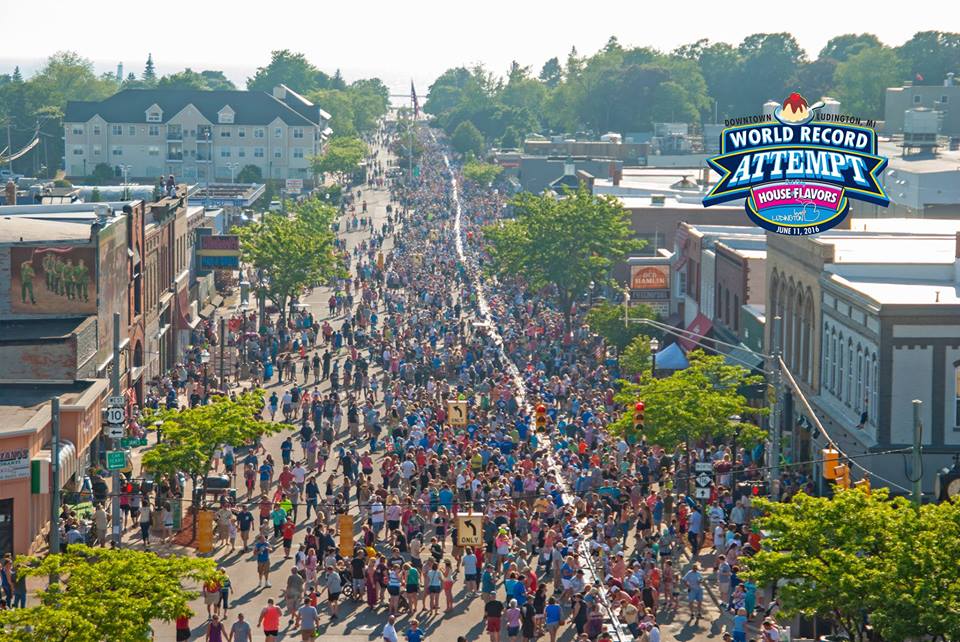 On June 11, 2016, we attempted to break a Guinness Record for the longest ice cream sundae. With the help of fifteen hundred volunteers, we were able to construct an ice cream dessert over a half mile long. The ice cream sundae was distributed along eight city blocks for 2970 feet.

The ice cream consisted of not only our blue moon flavor, but also a mint flavor and a vanilla flavor. It took months of planning and preparation. The dessert consisted of nine hundred gallons of ice cream, eight hundred pounds of chocolate syrup, six hundred containers of whipped cream, and some two thousand Michigan maraschino cherries. It was on Ludington’s main street of Ludington Avenue from Park Ave to Harrison St. The present world record length for an ice cream dessert is 1,957 feet (596.5 meters) set in 2015.

The Ludington event brought in thousands of people who all helped to consume the ice cream from some 18,000 cups. It took fifteen-hundred volunteers to actually make the dessert and hand it out.
The Guinness World Record authorities did not send an official to certify the event, but instead there was a group of engineers and officials that oversaw that the guidelines were followed. All the documentation of the event has been sent to Guinness for certification. We hope to get an official answer back from Guinness early September, 2016.